Eating Out In New York

Let me preface this story by stating that I just adore Cathy Erway's blog noteatingoutinnewyork.com. Cathy is a smart and young New York urbanite whose claim to fame is the fact that she volunteered to not eat out in New York for two years and documented the process. Having traveled to New York several times ever since I've been married, to visit my husband's sisters and attend the occasional wedding, I understand the absolute primal need one has for eating out while in the city.
So hats off to you Cathy...you're a better woman than I am.

Here's a little taste of some incredible food I  experienced while in the city...hope you like it!
Pause Cafe: 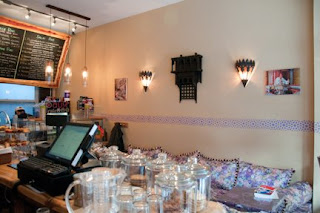 Cute little soup, sandwich, smoothie and coffee shop. I ordered a Ginger Carrot soup which made me feel fantastic.  I also had a great Ginger, Green Apple, Wheat Grass, Beet, Kale juice to follow-up the soup.  The soup was $5 and the smoothie was $4.50 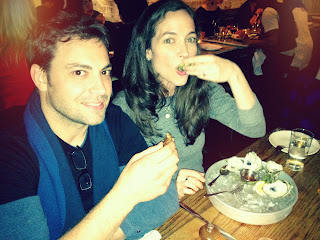 On the advice of my future brother-in-law, we visited this great little gem of a restaurant on Lower East Side.  Beautiful airy white room dotted with rustic picnic tables and plenty of seating along the walls.  This place is defined as a British Modern Gastropub that distinguishes itself by getting most of its food locally...and I verified this by asking the kitchen staff in Spanish. I know, I know, I'm a Noisy Nelly but inquiring minds...Anyhow, I got the Kale Caesar Salad and Oysters.  Both where delicious though the oysters were a bit small for my taste.  As for my husband Kris, he enjoyed the Bacon Cheese Burger immensely.  He said the inside was juicy, outside was crispy and the meat was locally sourced and cooked to perfection.The burger also came with an order of potato wedges fried in rendered duck fat...the dish was so delicious that I didn't give Kris a hard time about ordering, what appeared to be, the least adventurous item on the menu.

Call ahead and make a reservation or else just relax at the bar and enjoy one of their many fantastic British beers and the company of a very friendly bartender. 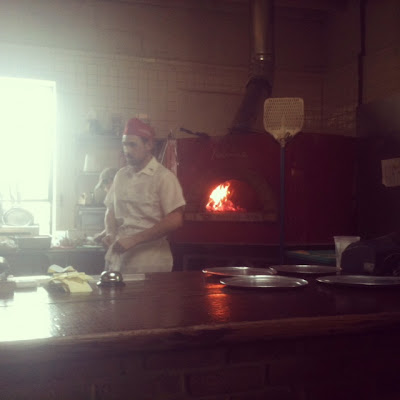 Tucked away in Bushwick, just off the Morgan Ave stop on the L train, is one of the most authentic and beloved spots for pizza in Brooklyn.  Like Gainesville's much acclaimed venue/restaurant/junk shop/bocce spot Satchel's, Roberta's is a destination, not just a place to chow.  Roberta's not only houses the most stellar piece of pizza making equipment I've ever seen...it's imported wood burning Italian oven...they also source locally through Heritage Foods and have a rooftop garden. 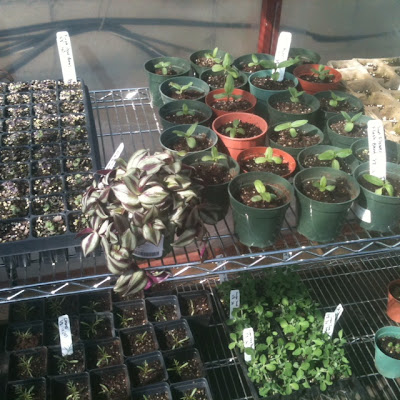 Just in case all this draw isn't enough to get you on down to Bushwick, the back of Roberta's is home to the Heritage Radio Network.  Remember the blogger/food writer I mentioned earlier, Cathy Erway?  Well, Cathy hosts a show out of the station called "Let's Eat In". During the show Cathy usually interviews local food artists, entertainers, food personalities, advocates and even the occasional sexologist about their creations.  Tune in Monday at 1pm or listen to her podcast whenever your little heart desires. 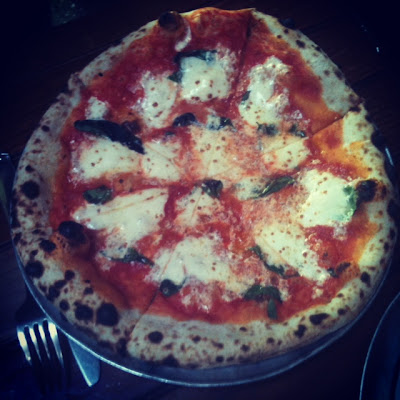 Now about the food...on the advice of our friends Marco and Sarah, we ordered the Calzon, a simple Margherita and a ham and pineapple pizza.  All of the above were delicious and perfectly crispy.  My favorite among them was quite surely the Margherita...thank you Sarah for making that suggestion. 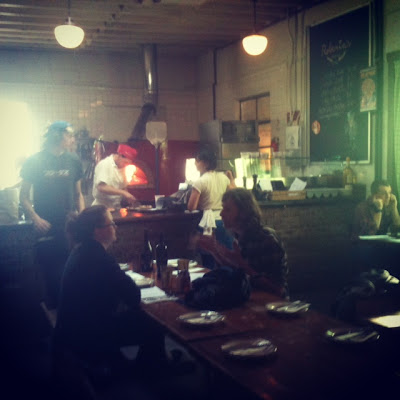 If beer's your thing, I highly suggest the Blue Point RastafaRye, a sweet and satisfying rye with an alcohol content of 7.5...this beer packs a pretty big punch for $7. Kris got the Smuttyhouse Porter, slightly lower in it's alcohol content, but quite comparable in flavor. We ate at about 3pm which seemed like the perfect time since we didn't have to fight for a table and eating early gave us ample time to walk off the calories around the city before hopping in the cab and heading to JFK. 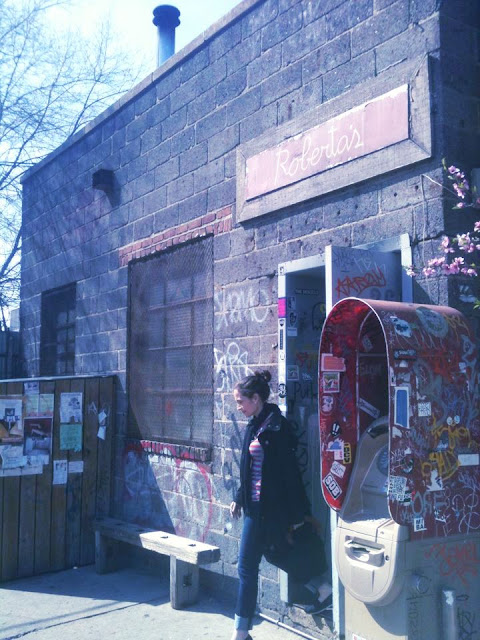 Special thanks to our extraordinary tour guides and amazing hosts...Candace, Cameron, Corinne, Sarah, Tommy and Marco for showing us around town and helping me to explore New York like a native and bring something back for the rest of you all to enjoy.   Also, a very special thanks to Vivian from Roberta's for allowing me to interview her about the restaurant and touring me through the rooftop garden.
Posted by Teresa at 8:15 AM